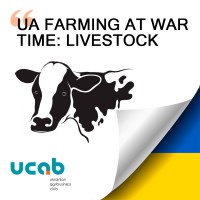 Ukrainian Agribusiness Club together with UCABevent agency organized the third webinar for foreign partners on April 21, during which speakers shared their thoughts about milk production prospects, beef supply and demand, poultry production and exports.

- Olena Dadus, Deputy Director of the Department of Agrarian Policy and Agriculture

● We have mostly dairy cattle in Ukraine. In all 2,6 mln heads of cattle, including 1,6 mln cows (dairy 98%), 8,7 MMT of milk. That is the figure for the 2021. Dairy farms are mostly concentrated in West, Center and North of Ukraine. Because those regions were able to grow silage corn with high yields.

Our army regained the territory in northern and north-eastern regions during last weeks, which are significant producers of dairy products. Following the outbreak of war, we saw the eruption of all logistics. It was a shock and a big loss of milk. And there was also a big problem with inability to milk cows, inability to go to the farm, to feed animals properly. So that was a big problem in the areas which were under occupation. In the Chernihiv, Kiev and Sumy regions, there was great destruction, many farms were bombed. Loss of herd due to occupation and battles up to 15%.

● Because of the situation in the market and inability to drop in demand for milk products, we also saw some drop in milk prices. If we compare that to the EU prices, for example, the difference in the spread even higher. The price is 35 euro cents per kilogram, while in the EU it's almost 43 euro cents per kilogram of milk.

● Beef market in Ukraine: 288 KMT of cattle carcass weight for slaughter 2021; That was taken last year, and we exported roughly 10% meat (exports volumes — 27 KMT) to China, Kazakhstan, Uzbekistan, Azerbaijan, Turkey, Moldova and some Middle East countries. But with the start of the war we had a ban on beef export since Feb 24t to Apr 10th — now licensed export. Export it is positive to some extent signature because the beef meat were expensive, usually more expensive than chicken and pork. In Ukraine at the moment, we see the drop and decrease in demand are dramatic. So stocks were also quite big. So there is a need to have some export in that niche. Due to a drop in demand, inability to export, we have also had a sharp decrease in prices for live cattle. Price dropped from EUR 2,1/kg to 1,3/kg of live weight.

● Pig production is not going to have such big concentrations in some regions. The Kyiv region has one of the largest pig production. We have 5,6 min heads of pigs; 750 KMT of pork 2021 in Ukraine. And we also saw damages  to the pig farms near Kyiv and also lost production in an escalation in the Donetsk region, where we had roughly 400,000 pigs. Loss of herd due to occupation and battles up to 20%.

● Regarding poultry, it was the biggest market and biggest share has been the share animal production to have 202 mln heads of poultry. It's mainly chicken , but also turkey.  Loss of herd due to occupation and battles up to 15%. That sector we have also export share. 1,6 MMT of poultry live weight for slaughter 2021 and was export of 400 KMT 2021. Main countries: Saudi Arabia, Netherlands, Slovakia, United Arab Emirates, Azerbaijan.

●The estimate of losses in livestock farming is 15% Max. This is not dramatic. This is not critical for the security of the country nowadays. The Ministry of Agrarian Policy and Agriculture sent the government everything possible to boost the production amounts in peaceful territories and ensure their functioning in the production of these products. Some resources at the state level are allocated for this. These are credit programs, portfolio guarantees, maintaining demand so that processing enterprises work, buying raw materials, this is the purchase of certain types of products at the expense of budgetary funds in order to form and provide for the population in the territories where hostilities continue.

● The volume of production is due to the fact that it has limited opportunities to export certain top products, so the products remain on the Ukrainian market. The level of consumption is now somewhat reduced. Some consumers have temporarily left country, so the consumption level is lower nowadays.

● The government officials, together with the other ministers, are monitoring the consumption balances. First of all, to make sure the food security of the country is maintained, so that people have enough food and enough amount of the production stays afloat. But also the government works on encouraging the export demands or the types of produce that Ukraine has been traditionally producing. They have estimated the market situation and the consumption levels.

The structure of livestock production in Ukraine depended on two components - this is the production of agricultural enterprises and a certain part of the products was provided by households: about 62% of milk was provided by households, about 40% of eggs, poultry and pigs were also grown by households. Now, in those territories that are occupied, this is not discussed, in the territories that are free, some people have gone and the share of production by the households of the population has decreased. Therefore, the task of Ukrainian farmers is to compensate for this with a constant increase in the volume of production by agricultural enterprises in order to keep the balance and ensure food security.

Olena Dadus draws attention to such aspects in the situation in livestock farming:

“We brought certain initiatives to our international partners so that they support given financial instruments for the livestock of households that have up to 50 animals for now because these logistics systems are damaged, and they need to be revived. Enterprises with a stable production volume can communicate and build new chains with processing enterprises.

We need to communicate to build the new chains of our production with new partners. So we have these double vectors, a number of instruments was created to keep the industrial production of the amount that can secure the inputs into put security in our country. We are working separately to support the work of small farms so that they can cover food needs in certain areas. We call for a review of a number of products processed by enterprises in accordance with the realities that we have today.

If we talk about the medium-term forecasting of the situation, then we hope that in the near future there will be a victory. But animal husbandry is an industry that depends on the feed component, the price situation and the demand for consumption. So far, all forces have been assigned to the sowing campaign, but a significant share has been devoted to fodder crops. For the situation with animal husbandry, next year will depend on the number of fodder crops”.

The impact of the war on beef business can be understood by the example of the Skott Smeat, about which Andriy Naumenko, CEO of this company, spoke about: ”Despite a full-scale war, we are operating at 70% of our capacity. At the beginning of the war, we did not work at all for 2 weeks, there were no slaughters, there were only shipments of products that were in warehouses. On March 10, we began to restore the slaughter of animals, found farmers who were ready to sell live cattle, and called drivers who were not afraid to transport products. Our production is our territorial defense, which should supply Ukrainian consumers with protein. We lost all pre-war exports because they were not subject to licensing. Now we have applied for licenses, and we have already received them in some countries. We solve logistics issues.

Export of livestock even in transit through Europe is almost impossible due to veterinary barriers. The situation is expected to improve. The main thing is that we should be competitive in those markets where we can supply products, as the time and cost of logistics has increased.”

Dmytro Hlushchenko spoke about the situation in milk production:

“I operete 6000 hectares of land also kept one of the most innovative farms in Ukraine with their robotic, milking and 1000 dairy cows. When the war began, we got some problems with selling milk because our main processor was Ukrainian company that makes milk and export it. That's why we need like three or four days to find processor firm, but problem was solved.

But anyway, it was a very hard time. In the first month we decreased our feed, because we're not sure if there will be enough soybean, sunflower feed that we buy in Ukrainian territory. It influenced that we decreased from 31 liters to 26 liters from milking cow.

Now we see that price for feed like soy or sunflower is almost the same price or even higher than it was before the war.

The next problem we faced was the logistics, so all the feed stuff was not shipped, and we got to buy everything in it worse conditions. For this year, we see that feed costs for silage, for grains that we produce in farm they're also much higher because fertilizer prices are higher.

All costs of milk production increased, but the price for milk even is not on the before wartime level. So that is the main problem we're facing now”.